rscvm-ecws04
Blog > 3 Reasons You Should Fix Your Pet

3 Reasons You Should "Fix" Your Pet

Jim with his dogs, Bodie and Sam 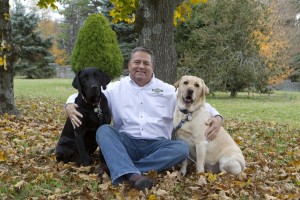 I think I know the basic definition of the concept of cause and effect. To be sure I was right, I consulted Wikepedia, which confirmed my understanding. Cause and effect (also written as cause-effect or cause/effect) refers to the philosophical concept of causality, in which an action or event will produce a certain response to the action in the form of another event.

Having spent most of my adult life engaged in various efforts to protect animals, cause and effect means something a little different to me.

The failure to have one’s pets spayed or neutered CAUSES the EFFECT of the birth of unwanted puppies or kittens. It’s a simple concept, really. I suppose one could launch into a detailed “birds and bees” explanation. However, presumably, everyone in our readership has a pretty solid understanding of the origin of babies! If not, that’s a whole different blog… I digress.

Spaying or neutering our pets is the right thing to do. First, it gives you assurance your pets are not contributing to our nation’s burgeoning population of unwanted puppies and kittens. Pet overpopulation is a international crisis. There are  tens of thousands more dogs and cats than there are homes for them.

Every unplanned, unwanted litter makes the problem even worse. Although their only crime is being born, which isn't a crime at all, the animals are paying the ultimate price. They are dying on the streets and dying in our nation’s overburdened animal shelters. Furthermore, having your pets spayed or neutered makes them easier to live with! Pets who have been “fixed” (I LOVE that term!) tend to be calmer and less aggressive.

They also tend to stick closer to home since the urge to roam is often the result of searching for a mate. Having your male dogs and cats neutered before the onset of undesirable behaviors such as a territory marking can prevent such behaviors from ever showing up in the first place. Finally, surgically sterilized dogs and cats are healthier. Spay/neuter surgery eliminates the risk of reproductive tract cancer and other diseases. If you want your best friend to stick around as long as possible, having him/her fixed is like an insurance policy. Let’s review.

The CAUSE of not having pets spayed or neutered results in the EFFECT of unwanted puppies or kittens. Simply put, it is life or death.

The CAUSE of having your pets surgically sterilized results in the EFFECT of a happier, healthier friend for life who is not contributing to a surplus of unwanted pets. Again, we’re talking life or death. Speak to your veterinarian or your local humane society for information or referral to a low-cost program.

There have been too many puppies and kittens born as a result of the “ooops factor!” Even if your pet is always indoors, it only takes one single escape. With spring rapidly approaching, shelters are bracing for a tidal wave of kittens and puppies who will most surely flood their facilities throughout the warmer months. It is up to all pet owners to do their part to stem that tide.

Have you done your part? Are you glad your pet was spayed/neutered?

ABOUT JIM Jim Tedford serves as PetSafe® Brand's Director of Animal Affairs and Alliances. Working on the front line of animal welfare for over 20 years, Jim has served as CEO for organizations in New York, Louisiana and Tennessee. Prior to joining PetSafe, Jim provided marketing and fundraising services to animal welfare organizations nationwide. Jim holds a degree in animal science from the University of Tennessee at Knoxville. Jim and his wife Ann share their “empty nest” in the Smoky Mountains with adopted dogs Bodie, Sam, and Lila and a formerly homeless macaw, Gipper.