rscvm-ecws04
Blog > Behind The Camera 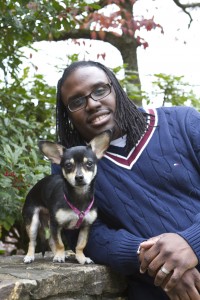 Like most people, growing up I often wondered what I wanted to do with my life. Did I want to be a doctor, fireman policeman etc.? Of course! Most kids do! I would assume the reason for this could be readily ascribed to the overwhelmingly intriguing presence of the individuals fulfilling these particular roles that often left an indelible impression on me, often times at first sight!

For example: As a child, when you go to the doctor’s office and there’s this clean-shaven gentleman or nice pretty lady wearing a white lab coat while wielding these really cool instruments, this easily leads a child of curiosity such as myself down the imaginative path of one day becoming a doctor.  But then, enter in the shiny red truck with the sirens and the big hats with boots and raincoats and once again, smitten! But then surfaces the police officer who is dressed in all blue sporting an octagonal hat with the funny looking emblem on the front and there I go. All of a sudden, I become this little kid with all of these decisions to make.

Whew! Overwhelming isn’t it? But how many kids do you know at that impressionable age that say ‘Hey, you know what? I want to be a videographer!’?  I watched a ton of television when I was a kid, and often wondered to myself “how’d they do this or that?” but never really ever entertained the idea of becoming who I am today until about 3 and a half years ago. I’ve always had a rather in depth affinity for animals, but especially dogs (We’ll save that story for a later date). As a kid and well into my adulthood, I was rarely ever without some sort of dog, whether it was a mutt or a full breed, made no difference to me, it was mine!

Upon moving to Knoxville roughly 8 years ago, I began the path of getting “settled” into a rewarding career. I entered into college for video production, and it was there that I encountered that warm and fuzzy “smitten” sensation I felt when I was a kid. About half way through college, I landed a job at this really cool company, and you may have heard of it, Radio Systems, affectionately referred to as PetSafe. Aside from the warm and inviting culture here, one of the things that pulled me in was that I had an unlimited access to dogs, because as an associate here, you’re allowed to bring your pets to work!!! Pets in the workplace? Yes please, where do I sign?  So I started in the Customer Care Center, where I took calls until I observed that I could literally potentially merge my newly found passion, with an old squeeze of my love for pets and form the perfect career marriage! And it worked! I now love my late career choice, while enjoying the occasional rub of one of our resident pups! Most of the videos you see on our youtube or our website petsafe.net were crafted by me, alongside the creative genius of our marketing team. Life is good.