There are so many superstitions circulating around in the world: don’t step on a crack, you’ll break your mother’s back; don’t walk underneath a ladder, spill salt or break a mirror. Oh, and don’t open an umbrella indoors or pick up a penny on tails. All of these are considered bad luck and the list goes on. While these superstitions are silly, they aren’t very harmful to anyone in particular. Worst case scenario, you have a lot of people watching where they walk, not touching strange money and keeping the salt in the salt shaker.

There is one particular superstition that takes aim at the reputation one of my favorite species – the feline, particularly… the black cat. Folklore about black cats, or cats in general, travels back thousands of years and spreads across many cultures. The most commonly known superstition about black cats in North America is that if one crosses your path, you’re in for bad luck. Most people know that this superstition is about as silly as the “don’t step on a crack” bit. If it weren’t, the hospitals would be overrun with mothers with back injuries. Luckily, the majority of people know that this superstition is merely an old wives tale and ignore any meaning it may have once had. 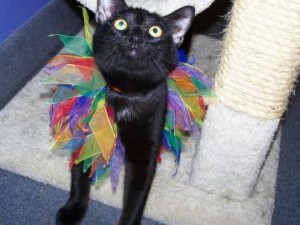 While Hollywood does its best to associate black cats with Jack-O-Lanterns and Halloween, and the commercial fall decorating industry would have us associate them with witches and broomsticks, we as pet lovers know that the only thing suspicious about a black cat is how their fur always ends up where you least expect it. To those who may still harbor superstitious notions towards our feline friends, allow me to introduce you to three examples of respectable, highly loveable cats that I’ve met or seen over the years to disprove the theory that black cats are unlucky.

Example 1 Name: Frimbo Location: Formerly up for adoption at the Richmond SPCA. Currently living happily ever after in her forever home. Color: Ebony Verdict: While Frimbo wasn’t the most popular cat in her “Cat”tilion, she was adored by the volunteers and staff in the shelter, putting her at number #9 on the list of Top Ten Adoptions of 2010 . Her frisky personality and brutal honesty won her the respect of fellow felines, adoption counselors and ultimately her adopters. There’s nothing unlucky about that!

Example 2 Name: Charlie Location: Resident cat at the James River Cellars Winery in Glen Allen, VA Color: Licorice Verdict: This cat is as sweet and charming as the dessert wine served at this winery! Actually, I’m convinced that every time I have seen Charlie, I've had good luck for the rest of the day. Not to mention he’s a great snuggler!

Example 3 Name: Felix the Cat Location: The Tube Color: Monochrome Verdict:  One of America’s favorite cats, Felix has been around since 1928. His mischievous nature didn’t bring bad luck to anyone…except maybe himself from time to time! I'd say that anyone that has been around for as long as he has - fictional or not - has to be lucky. 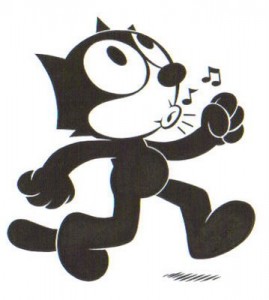 From these three shining examples, I hope I’ve swept away any superstitious notions that black cats are a symbol of bad luck. As a matter of fact, the next time you see a black cat out and about, you may want to walk over to meet him. You may just be lucky enough to meet a new friend!   Name some of your favorite black cats!