Our dogs bark as a means of communicating with us. Unfortunately, we tend to respond to their bark with mixed messages. It may be confusing to dogs when it is or is not alright to bark. We want our dogs to bark to alert us at certain times, such as when a stranger approaches, but we may not want them to bark at welcomed guests. But is it possible to keep excessive barking under control and still teach our dogs that sometimes barking is OK and even preferred?

It is unrealistic to assume our dogs will never bark. In the words of Ian Dunbar, a veterinarian and animal behaviorist, “You may as well expect the dog never to wag its tail.” Because barking is a dog’s form of communicating, we simply have to learn to speak “dog.”

The best way to get barking under control is to first teach the dog how to bark on command. This gives the owner some control over the behavior. Many owners don’t realize the importance of encouraging the dog to bark. However, this step is essential for teaching the more important SHUSH or QUIET command.

Teach your dog to SPEAK and praise him when he does. 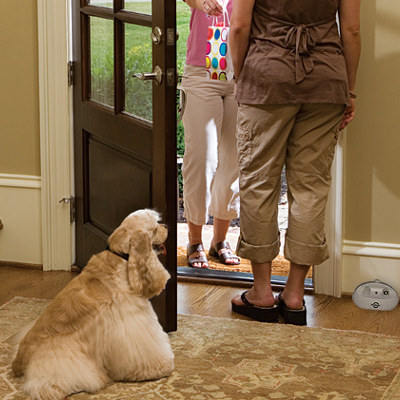 You can use whatever causes your dog to bark, such as having your friend walk by with another dog or playing the sound of a barking dog. You can also play the sound of a doorbell from your phone or computer.

There is no need to give your dog a treat; the act of barking is enough of a reward for the dog. As your dog barks, give him some applause, pat him on the head, smile, and praise him. Once he starts to settle down on his own and stops barking, you’re ready for the next round. For some dogs this will be a few seconds, but other dogs may take a few minutes.

Another alternative to the doorbell method is to simply yell SPEAK every time your dog starts barking. Eventually he will learn that when you yell SPEAK, it’s time to bark.

Ironically, many dogs have learned to associate the word HUSHwith barking! This is because every time the dog starts barking, the owner joins in on the fun by yelling “HUSH!” In doggie language this means, “Let’s bark it up together!”

Tell your dog to HUSH while holding a treat. 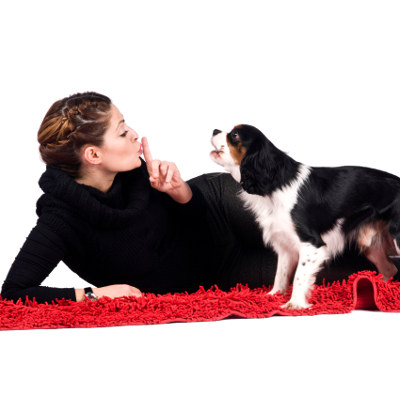 Once your dog learns the meaning of SPEAK, it will be much easier to teach him HUSH. First, instruct your dog to SPEAK and get him really worked up. Join in!

Then, tell him to HUSH and hold a tasty treat in front of his nose. It has to be something more enticing than your average biscuit, such as a piece of cooked chicken. Since it’s impossible to sniff and bark at the same time, your dog should stop barking immediately.

After a few seconds of silence, give him the treat. You can use another treat as a lure to help him sit or lie down and be still. Talk in whispers and once he settles down, instruct your dog to SPEAK and repeat the process a few more times.

Repeat these steps until you can turn your dog’s barking on and off whenever you want.

You can’t expect your dog to figure out the things you want him to bark at and the things you don’t without giving him some help. Once your dog understands the difference between SPEAK and HUSH, it becomes much easier for him to learn when barking is an acceptable behavior.

The best approach with your dog’s barking is to teach him that barking is OK and sometimes even encouraged, for the right reasons. Whatever method of bark control you find effective, use it to enjoy more of what you love about your dog. You’ll both be happier when your dog understands your expectations.