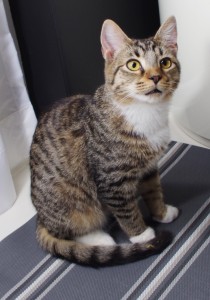 Recently, our marketing department had a video / photo shoot for fountains. We had several cats appear and disappear (under a stove, into their crates, under a large tarp, etc), as they were not really interested in adding acting to their resume. So, we were in dire need of some cats willing to put out a little extra effort. So, I contacted The Stray Connection in Knoxville, TN.

In the past, I have found that cats from rescues or shelters do better in strange environments. They are used to going to adoption fairs and having lots of people around. So, I thought I’d take a chance and see if I could get a cat or two. Although it was very short notice, less than a day, The Stray Connection came through for us. They sent us a cat that was willing to work for two days straight, with only a quick catnap or two. He did an incredible job.

This is his story. THIS POST CONTAINS A PHOTO OF A VERY SICK CAT! 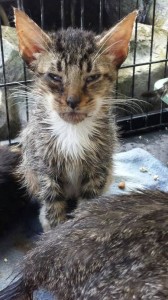 When Jackie was first rescued.

Jackie Chin was born into a nice home with a nice family. But they did not have any idea how to care for cats. That included not getting them spayed and neutered. It got out of control quickly. Some good Samaritans, sad to see several cats killed in the street, stopped to offer help. The family was very relieved to have someone wiling to help.

The good Samaritans contacted a local woman, who works with several local rescues, The Stray Connection and Feral Feline Friends. She started by getting the adults altered using TNR (trap, neuter, return). She had not intended to take any kittens, since most of them looked pretty healthy. But after a week or so, all of the kittens got Upper Respiratory Infections. So, she brought them all home.

Jackie was the worst with both a horrible URI and a broken jaw. In addition to the URI and broken jaw, Jackie developed megaesophagus. It is a rare condition where the esophagus becomes enlarged and does not allow food to properly pass through. There is no real cure for it. Even more rare is the cat that grows out of it.

One of the few things Jackie could eat was Easy Cheeze. Yes, that’s cheese in a can. Yes, it’s not good for cats, but it kept that little guy alive. Now he is healthy, active and looking for a good home. 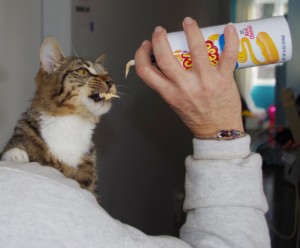 Jackie is a real lover boy! He loves to snuggle and hang out with people. He’s also young, active and loves to play!

Unfortunately, several of the other kittens did not make it. However, the rest have recovered and found happy forever homes. Jackie is still looking, along with Fifi and Alfalfa. Fifi and Alfalfa are bonded and must be adopted together. 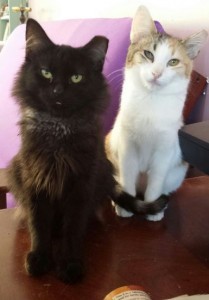 Fifi and Alfalfa did so well at the video shoot!