March 19 is National Day of Laughter. We know that no two dogs are alike, and their personalities range from stoic to goofy comedians. But do dogs laugh? For many years, scientists believed laughter only happened in humans, but that perception has changed. 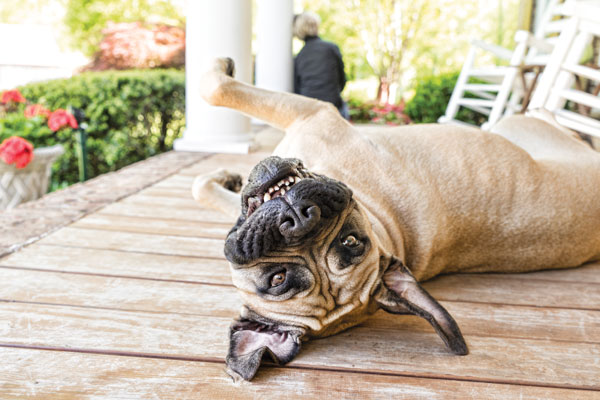 Veterinarian and ethologist Michael Fox reported in 1998 that dogs used a breathy exhalation during play that might be compared to the human laugh. He noted this sound appeared to be exclusive to play and friendly greetings, and was used to signal the concurrent behavior was no threat. Such signals are often described as a calming signal that relieves stress in other anxious dogs.

Konrad Lorenz, a Pulitzer prize winning Austrian zoologist and ethologist, also believed dogs had the capacity to laugh, and wrote about it in his book, Man Meets Dog (Routledge Classics, 2002). He agreed with Fox that the “dog laugh” most often happened during play with a beloved human, with the canine somewhat mimicking the human smile with open mouth and stretched lips. But he also pointed to a very specific “doggy laugh” sound that was described as a huffing breathy “laugh pant” behavior.

Researcher Patricia Simonet followed Lorenz’s speculation with experiments recording dog sounds during the early 2000s. She recorded dogs while they played at the park, and later analyzed the sounds they produced.

Simonet said the dog laughter sounds like panting, sort of a “hhuh, hhuh” sound. But once she analyzed the recordings, the sounds were quite different than normal panting. Dog laughter panting included a broader range of frequencies than every day dog panting produces.

To further test her theory, Simonet played the doggy laughter sounds to a group of 15 puppies. The sound made them frolic and romp with joy, making her speculate they recognized the laugh-pant as a play signal.

She followed these experiments in 2005 with studies in an animal shelter environment. When recordings of dog laughter played in the shelter, the listening canines acted calmer. Simonet suggests that such positive dog sounds can help relieve the stress in such circumstances and help make shelter dogs more adoptable. And that’s a benefit that makes us ALL laugh!

Do Your Dogs Laugh?

Yes, dogs laugh! And you can laugh back at your dog, and inspire more happiness. Here’s how to do it.

A dog laugh sounds similar to a human saying, "Ha-ha-ha-ha!" but without sounding the "a" vowel. It's simply a breathy exhalation. Experiment with reproducing the dog panting laugh sound to see how your dog reacts. Researcher Stanley Coren says his own dogs respond best to a “Hhuh-hhah-hhuh-hhah” with the “hhuh” made with slightly rounded lips.

There's also research that points to a dog sneeze in certain circumstances to being similar to a "canine giggle" of delight. Trainer Turid Rugaas of Norway categorizes a “play sneeze” as a calming signal that tells other dogs the current behavior is no threat, but meant in fun. I tried this with my own dog, Magic, and when I sneezed he looked at me with surprise—and then immediately dropped into a play-bow and then danced around the room.

Sneezing can prompt a reciprocal sneeze in your puppy, too--because after all, laughter is catching and good medicine. Try it!