rscvm-ecws03
Blog > Help Your Pet Have A Healthier Mouth

Help Your Pet Have a Healthier Mouth

We may think that it is a matter of life or breath, but it is really is a matter of life or death. With the advent of modern diets, dogs and cats don’t have many of the tools that they evolved with to clean their teeth and keep their gums healthy. It may not be very appetizing to us, but chewing through tendons, skin, and bones does a really good job at cleaning plaque off the surface and from in between our animals’ teeth.

Modern pet food is, for the most part, nutritionally sound, well-balanced, and highly nutritious. However, if you only ate food that amounts to something the consistency of dried oatmeal and could not brush your teeth, I don’t think it would come as a great surprise that your oral health wasn’t what you would aspire to. And we’re still looking for that toothbrush that allows our animals to brush their own teeth.

Oral Health Is All about Bacteria

Dogs have over 400 different species of bacteria in their mouths. Cats have approximately the same number, albeit a different mix. This sounds horrible, but in reality, you and I have about the same number of bacteria even with twice a day brushing and excellent oral health care. In fact, recent science has shown us that a healthy bacterial population is actually critical to keeping “bad” bacteria out. This is referred to as our animal’s “oral microbiome,” and it is fascinating in its complexity.

You can think of a microbiome as a city of bacteria. Some are producing, some are consuming, and all of them are contributing to the general environment of the mouth. There are rich, healthy, vibrant cities that don’t tolerate crime or unhealthy neighborhoods. Sadly, there are also cities that just can’t seem to do anything about those problems.

Mouths are like that, too. Mouths with healthy immune systems, low levels of plaque and tartar (the hard coating that develops on un-brushed teeth), and frequent exposure to food, toys, and treats that challenge the gums, tongue, and teeth are like good cities. They look, smell, and feel good. Think about the way puppy breath smells and you get the idea about what I’m talking about.

Bad mouths, conversely, smell bad, and if you “flip the lip” on one of those mouths, you can see not only plaque and tartar, but also swollen gums, loose teeth, and sometimes even open sores. This is all evidence that bacteria are breaking down the very ligaments that hold teeth in the mouth. 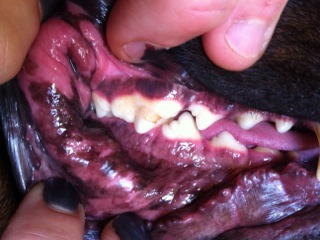 How Can You Help Your Pet Have a Healthier Mouth?

We all want healthy mouths for our pets. The basis of a good, healthy mouth, like good health in general, starts at the veterinarian’s office. Getting a thorough dental cleaning twice a year, under anesthesia, is the basis of a healthy mouth. Cleanings without anesthesia are sometimes offered, but science has shown us they are not nearly as effective. Without being able to clean the plaque underneath the gum line, the bad bacteria take over the town again almost immediately. It is sort of like taking a shower with your clothes on. Some parts get clean, but no one could say it is effective.

Between cleanings, brushing at least three times a week is very effective. Unfortunately, brushing any less frequently, say once a week, can’t stop plaque from becoming tartar, and since brushing can’t effectively remove tartar, it doesn’t appear to be very helpful.

Food and treats are also important. An occasional bone that's hard and large enough to minimize the chance of choking, especially one that still has some gristle attached, is a special treat for many dogs. Of course, all pets should be observed until you’re sure they won’t hurt themselves with any treat. Lastly, there are dental-specific toys and treats that can help exercise the mouth and keep tartar under control between cleanings.

There have long been sought ways to make maintaining oral health easier – water additives, gels, enzymes, even vaccines against the “bad” bacteria have all been tested. Unfortunately, nothing commercially viable has been proven to be effective yet. It's only a matter of time though, and Morris Animal Foundation has funded several studies in an attempt to find innovative approaches. As soon as we have something proven, you can be sure that as a profession, veterinarians will sing about it from the mountaintops.

Oral health is critical to general health, and unfortunately, it is not something easily tackled. That said, it is possible and indeed necessary for us to monitor and help our pets’ mouths. We will keep looking for better ways, but until then, keep up on the brushing! 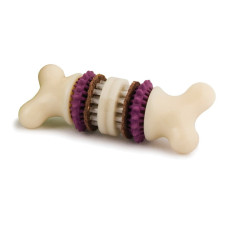