After listening to feedback from 2012 Bark For Your Park participants, we knew you wanted to see your dogs front and center during our annual contest. So, we launched the Hero Dog contest last month to search for the faces of this year’s dog park contest. The voting ended last week and we’re so excited to introduce our heroes to you. 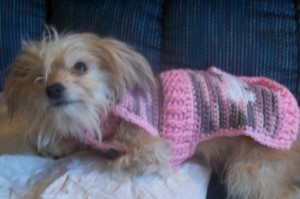 Sweet Pea finished on top of the 142 entries for the Hero Dog contest.

Sweet Pea will be the first dog to be featured on the site, starting on May 1 when the contest launches. Her mom, Eunice, first rescued Sweet Pea’s mother and Sweet Pea was born in her home. “When she was born, she had a special sweetness about her,” Eunice writes. “She is a bundle of love. She was born with one of front legs not fully developed and lost her right eye in an accident when she was two months old. My favorite thing about her is that she does not let her disability stop or slow her down.”

Eunice started a Facebook page to educate other pet parents that just because some pets have disabilities doesn’t mean they can’t live a functional life. “You just have to do it differently,” she said. “Entering the contest was our way to show that even with a handicap you can join in.” When notified of her first place finish, Sweet Pea admits Eunice was more excited than she was. “I knew I would win,” she grins. 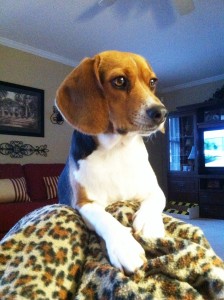 Our second place hero Maddie joined her family after they lost their first beagle. “We went about three months thinking we didn’t want another dog because we didn’t want to go through the pain of losing it,” her mom, Deb, writes. “We finally decided the joy of having another dog out-weighed the pain of losing one. Maddie has been a great joy and addition to our family.”

The family went through four different names trying to decide on the perfect one, and Maddie was the name that just felt right. “She is the friendliest, sweetest dog we have ever had,” Deb said. “She loves to be loved, always wants to be near me and follows me from room to room.” Deb knew as soon as she heard about the Hero Dog contest Maddie was a winner. “I have had her pictures on Facebook ever since we got her when she was 8 weeks old,” she said. “My friends fell in love with her. I’ve had people tell me they love her even though they have never met her.” Just like Sweet Pea, Deb said the second place finish didn’t affect Maddie. “I don’t think she will let the fame go to her head,” she said.

Bandit wants dogs every where to know it doesn't matter where you've been, it matters where you're going.

Bandit the pug, who was adopted as a playmate for another pet that passed away soon after Bandit joined the family, came in third place for the Hero Dog contest.

However, the loss hasn’t slowed him down from making himself at home. “We named him Bandit, because he has a black mask on his face and loves stealing food,” his mom, Yvonne, said. “Every time when he sees an opportunity to grab a mouth full of food, he will it in the quickest and sneakiest way.”

Though he is shy and laid back, Bandit loves all people and animals. He is very gentle and loves to please people. He’s even been known to befriend cats!

When he was first adopted, he was covered in fleas & dirt and wasn’t very socialized. He has come so far, and his mom entered him in the Hero Dog contest as a way to spread the message of adoption. “A lot of owners feel bad about their dogs’ previous experience and the energy can really project to how the dogs see themselves,” she said. “Dogs are very forgiving and happy-go-lucky. They live their lives looking forward.”

Bandit barked with joy when he found out he won. “He would like to thank everyone who voted for him,” Yvonne said. “He can’t wait to bark for his park. Paws up!” We couldn’t agree more. In a few short weeks, Bark For Your Park will launch and communities will have a chance to win $100,000 to build a PetSafe dog park.

Is your community excited yet? What are you plans for participating?