rscvm-ecws04
Blog > How A Remote Trainer Helped My Dog

How a Remote Trainer Helped My Dog

With the help of Lickety Stik®, he picked up “sit” on my 15-minute lunch break when he was about 6 months old. A few weeks later, we taught him “lay down.” A few weeks after that, he picked up “stay” in one evening. He learned all 3 commands within about 2 months.

There was just one obstacle - he was untrainable to recall. The dog ran. He’s the shorter, more furry version of Forrest Gump…with an under bite. He just. Kept. Running. We got an Elite Little Dog Remote Trainer and tried training him with the remote trainer, using a few different approaches. Yeah…he still just. Kept. Running. So, I gave up. 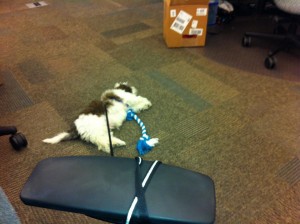 At work, he constantly whined and played the damsel in distress card and the other dogs came running to play. Body slamming and growling, like that sound Chewbacca makes, were his specialties. Try being in a meeting and having yet another weak moment and letting him off leash, only to have been duped by his good looks and charm, then immediately regretting it when he starts running laps around the meeting room table.

He was NEVER allowed off-leash in public, at the park, at the home of friends or family, outside OR inside at work. I had come to terms that he was going to be “that dog” and I’d just constantly be embarrassed by his behavior.

Until the day he ran out our front door, about one year old, and ran for the super busy road we live on. My boyfriend and I sprinted after him, screaming at him at the top of our lungs. It was like a game to him. Finally, Emmitt got close enough for his dad to dive after him, catching him by the tail. Crisis averted.

That was the day his remote trainer came out of retirement. At this point, he was a little older – about 1 year old. It was a completely different experience than when we initially tried the remote trainer. It took a few weeks, but he became trained with the help of the Elite Little Dog Remote Trainer. Don’t stop believing’, people!

Emmitt is now about 2.5 years old and is [mostly] an angel at work. 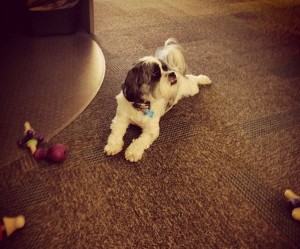 For over a year now, he’s been going to work with me once or twice per week and has been able to be in the building wearing his remote trainer, free of a leash. He wanders off every now and then, but doesn’t go far and all I have to do is press the “tone” button on the remote and he comes back right away.

He runs and plays with other dogs in the office, but the moment he gets loud or starts body slamming dogs, I press “tone” and he immediately comes to me. He also allowed off-leash outside at the office. Not kidding (I must get this on video so people will believe me) – when I get to work and park the car, I then turn on his remote trainer and hold it in front of him and he leans into it, basically putting it on himself, because he KNOWS he gets to be free from his 6-foot leash. To this day, people STILL see us at work and say in amazement “gosh, he’s such a different dog now, he’s so good!” We owe it all to patience, persistence and the Elite Little Dog Remote Trainer.

The Elite Little Dog Remote Trainer has changed our lives and dog’s life for the better, and probably the lives of all my coworkers and joggers at the park, too. Slightly unruly or highly unruly, I highly recommend trying a remote trainer for your dog, and your sanity.