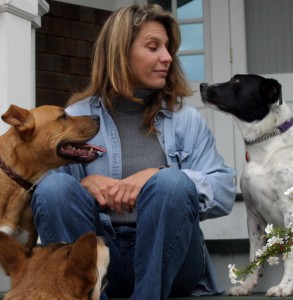 Aimee Sadler works with aggressive dogs in shelters to make them more adoptable.

She was one of the first “problem children” I met when I began my work at the Longmont Humane Society in 2005. Santa Maria was affectionate and loving but highly stressed when she was kenneled. She was jet black with soft eyes, silky smooth flat ears, and a mean tail! She jumped constantly, mouthed roughly, and barked in demand incessantly.

Santa Maria looked as if she was going crazy when in her kennel, and she couldn’t contain herself outside on walks. While she was sweet-tempered, she was so frantically rowdy that she was too challenging for most staff and volunteers. Santa Maria was really a nightmare to handle. We wanted to provide her with an outlet. We understood she was struggling to cope at the shelter, and we worried that her behavior would continue to decline. Of course, those who tried to handle her used treats to try to teach her better manners.

Unfortunately, as is the case with many animals in a stressful situation, Santa Maria was not interested in treats. To her, it seemed it was not the time to be enjoying food! Sadly, when people tried to pet her and soothe her, she became more frustrated and forceful. Unfortunately, many people had to endure her constant and uncomfortable bombardment just to get her on a leash. I observed her assertive and inappropriate behaviors escalating rapidly. It was time to help Santa Maria effectively and in a way that would be meaningful and valuable to her.

I was new at the shelter. I was aware that my approach to helping Santa Maria would be foreign to this well-intentioned group of staff and volunteers. How would they feel when I suggested using a remote collar to support Santa Maria? But, I recognized that time was critical for Santa Maria - we were losing her! There is nothing more heartbreaking than seeing an animal deteriorate behaviorally right in front of our eyes when we are trying our best to help them cope.

As the new trainer, I had the responsibility to allow Santa Maria to show me what she needed instead of trying to conform to the standard approaches that were clearly not helping her enough. Bottom line, if Santa Maria was deteriorating while in my care, I was not an effective trainer and her life might be at risk. She deserved our help. 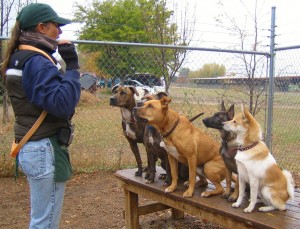 Check out Aimee in action! I sure couldn't keep that many dogs' attention.

With reluctance, the staff and volunteers observed my work with Santa Maria. Quickly, their concern faded and their heartfelt support emerged.

In our first session, I struggled to get her leashed just like everyone else. I offered her treats attempting to lure and reward her for a sit and establish some ability to reinforce behaviors I wanted.

No luck. She was extremely environmentally stimulated and had no interest in my varied high level treats. I tried to get her attention with some toys and play, but I experienced the same level of distraction and indifference to my rewards.

I then proceeded with our first lesson in understanding the sensation of the remote collar and how to make that sensation stop. Since I didn’t have meaningful rewards for her and I was competing with all of the rewarding sights and smells of the environment, my goal was to communicate through pressure and release so I could reinforce the calm and compliant behaviors I wanted, such as a recall.

As with all dogs, I knew Santa Maria would tell me what level of stimulation was meaningful to her by showing me an awareness of the sensation. It was important that she was not concerned, just aware.

Within a few minutes, she was consistently turning and approaching me when I called her while tapping her with the collar. After a few repetitions, she began to show interest and then enthusiasm for the treats that had previously been meaningless. Now we were “talking”! In her first session, Santa Maria learned and practiced her recall consistently from a free wandering and exploring state, to an alert and eager finished sit in front of me with tail wagging, happy mouth open and eager, pleased bright eyes.

Everyone was thrilled for her, especially when she entered her kennel calmly and without resistance or panic, seemingly prepared to rest and relax. I lingered with her, sat on her bench and enjoyed petting her and receiving her affection with staff and volunteers teary-eyed in observation of a dog that looked content. Santa Maria was the first dog that opened their minds and hearts to the expanded possibilities for the shelter dogs through a comprehensive approach to training. Remote collars continue to be part of our support system in our Training & Behavior Programs for Shelter Dogs, and we have Santa Maria to thank for being the shining example of a loving and eager dog ready to learn despite her challenging circumstances. Not long after, Santa Maria was made available for adoption and found her forever home.

ABOUT AIMEE Aimee Sadler developed her Training & Behavior Modification Program for Shelter Dogs through her work at Longmont Humane Society from 2005 through 2012. She is the Director of Training & Behavior for the Southampton Animal Shelter in New York and the founder of Point of View Training & Consulting in Colorado. With her behavior programs, both open admission shelters have reduced their canine euthanasia dramatically and maintain a canine live release rate in excess of 95%. Aimee travels the country supporting other shelters in the implementation life-saving behavior programs that embrace a comprehensive approach to training and focus on play groups as the foundation for happier and healthier sheltered dogs.