My family always had pets when I was growing up; dogs, cats, birds, hamsters, etc. As I got older, I developed a special affection for dogs.  But…I always had a ready excuse when someone asked me why I didn’t get a dog of my own – I travel too much for work, my house isn’t big enough, I can’t afford it –  the list goes on.

When I was hired by Premier in January of this year as a product manager, it was a perfect match:  doing work that I love, and getting to play with dogs that my coworkers brought to the office with them.  It wasn’t long before one of these coworkers Deborah declared, “You need a dog!” Deborah volunteers at Richmond Animal League, a local animal rescue, and one day she mentioned the shelter had recently received a really sweet, loveable pup that I might be interested in.

The list of excuses ensued, but I confess…I was a little intrigued.  A couple of days later she emailed me a link to the shelter’s website. Once I saw the dog’s picture, it was all over. This is the photo that did me in – love at first sight for Lucy. 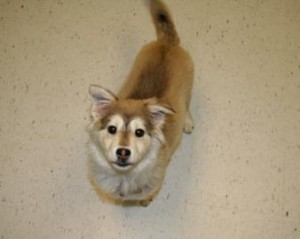 After a couple of visits with her and successfully navigating the application process, I excitedly brought Lucy home on March 19. I had no idea what I was in for. The first few days were a blur; fun and romping combined with frequent trips outside to avoid potty accidents (I’ve never spent so much time in my yard – wow, I need to catch up on my weeding!).

The first vet visit was a harbinger of things to come:  pulling, jumping, barking, whining, you name it.  My sweet, affectionate girl would turn into a monster when we left the house. I signed up for puppy manners classes, which I came to dread every week, as Lucy would wag her tail and bark non-stop at other dogs, other people, me, the water bowl, the door, the chairs, basically anything and everything.

The instructor was unfazed and told me to let her “bark it out,” but I was humiliated – I must be the worst dog-owner ever. Surely someone was going to call Animal Control on me.  Had I made a mistake by bringing this puppy home? Friends, family and the invaluable trainers here at Premier, who I bugged constantly with my incessant questions, kept reminding me that Lucy was still a puppy and that things would get better.

I wasn’t so sure. The class handouts came home and we practiced the exercises. When she learned “sit,” “down” and “leave it” quickly, I was encouraged.  Like many dogs, she seemed eager to learn and to please, so I gradually started introducing other behaviors into our training repertoire.

The Premier Gentle Leader and Easy Walk Harness have been fantastic tools in helping curtail Lucy’s jumping and pulling. Of course training has been very beneficial, but I think another factor has contributed to our improved relationship, that is, and my realization that raising a dog is a work in progress and that I shouldn’t take every misstep, perceived or real, so seriously.

Most of Lucy’s behavior issues can be corrected with training, some she will grow out of, and one or two may be just part of who she is and that’s ok. 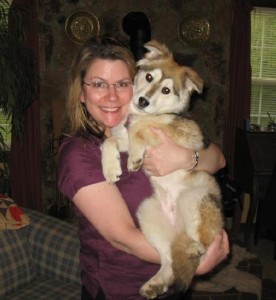 I guess as an adult first-time dog owner, I had a pre-conceived notion that having a dog meant unconditional love and affection, playing fetch, and the occasional outside potty break.

I didn’t realize all the work that was involved, but it’s all worth it, because I got the love and affection part right. Now…I can’t imagine my life without her!

Fellow Fido owners, what were some of your misadventures in puppyhood?  What have you learned since raising your first puppy? 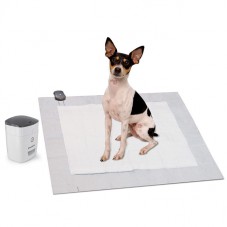