Jack and Lil: Ready to Rally! 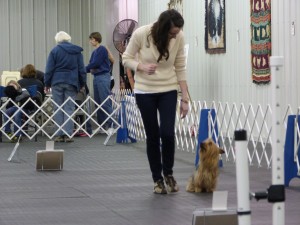 I was first introduced to rally obedience through a class offered at my training facility. After completing the set of classes, Jack and I competed in UKC rally obedience trials subsequently earning his RO1 and RO2 titles.

So what is rally? The dog and handler team move at their own pace, very similar to rally-style auto racing, through a course composed of 10-20 stations. Scoring is based on the correct completion of each of the station instructions. Examples of stations would be “Right Turn” or “Halt, Sit, Down.” They progress in difficulty to exercises such as “Send to Jump” which includes a hurdle to jump over or “Offset Figure 8” which consists of weaving through bowls of food. Communication from the handler to the dog is encouraged and perfect heel position is not required.

There should be a sense of teamwork and enthusiasm as the pair go through the course. Competitions are held by various groups including the AKC and UKC. There are also various levels of difficulty including on leash, advancing to off leash. Rally is a great next step past basic commands towards either obedience competitions or just to further challenge your dog.

What I love about rally obedience is the interaction allowed with the pet. In beginner levels the dog is on leash and the handler is encouraged to interact with the dog through voice and gestures. While treats and touching the dog is not allowed, patting of the leg or saying “Come on Jack! Let’s go!” as he or she follows the handler around the ring is acceptable. 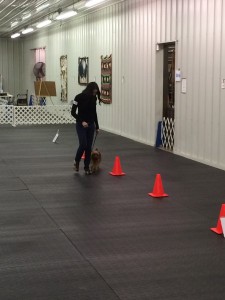 Another great thing about rally is that any dog can participate! I enjoy watching other competitors interact with their dogs from Rat Terriers to Newfoundlands and everything in between. Each handler and dog have their own dynamic and communication style. There is also a sense of support between handlers. I attend competitions with others from my training facility and we all encourage and clap for each other.

My personal experience in rally has been fantastic. I can tell Jack has fun and he always seems proud when we have finished the exercise and I am able to praise him. During our first competition, Jack received qualifying scores in his first three trials, advancing him to the next level of competition off leash. Jack and I had never practiced off leash before but I was already at the competition, so why not try it?

I went in to the ring and slowly took off his leash. His little tail started going crazy. In my mind I was prepared for him to run around the ring and throw himself a party for being free. However he didn’t do either of those things. We went very slowly through the course as I encouraged him to stick right by my side. To my shock, he not only did well, he received a perfect score. In rally, rankings are determined by highest score with speed only used as a tie-breaker if two or more teams receive the same score. To add to my surprise, I received the High in Trial, beating all of the competitors who competed in that round, including much more experienced dogs and handlers. 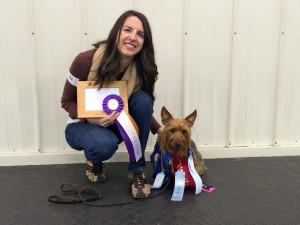 My biggest lesson was have faith in your dog! More than once I’ve thought “That trick is too challenging” or “There’s no way Jack can do that!” only with him to turn around and prove me wrong. Challenging your dog’s skills will not only improve them as a pet, but you as an owner/trainer.

As I mentioned in my previous blog post, Jack came to me a very spooked dog. Attending competitions in unknown environments, with strange dogs and lots of action has built the trust he has for me and helped him work on his focus. Sound like something you and your dog would enjoy? I encourage you to reach out to your local AKC, UKC clubs or training facilities to see if there are rally obedience classes offered near you!