I rescued Sadie when she was about 6 months old.  She was lucky enough to be living in foster care, so she already had a few house manners and even knew “sit”.  Unfortunately, she didn’t know that shoelaces weren’t for chewing and that plush carpets weren’t for peeing on.  So my training with Sadie started pretty early. I didn’t have any real training experience before Sadie, so most of it was trial and error.  I wanted to develop a trusting positive relationship, so I never raised my voice.

After we had the basic commands down, I wanted to keep going because it was a lot of fun when she actually learned it.  So I moved on to fun tricks. A few months later, Sadie had officially learned: sit, lay down, drop it, roll over, shake, shake with her other paw, jump, turn around, crawl, walk between my legs, walk backwards, head down, speak, be quiet, give hugs, give kisses, and more.  Every single trick was taught using positive reinforcement and lots of treats.

My personal favorite (and usually a fan favorite) is Sadie’s “Are you shy?” trick.  When I ask Sadie in a crowd of people “Sadie… there’s an awful lot of people looking at you.  Are you shy?”  This is her response:

Sadie, are you shy? 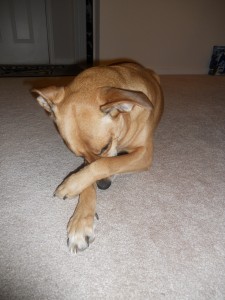 She has no idea what “Are you shy?” means.  In fact, she’s one of the least shy dogs in this world.  But when I say “Are you shy?” she actually hears “Sadie, my lovely bundle of joy, would you mind putting your paw on your nose so that I can reward you lavishly with treats and praise?” How did I get her to do this?  Here is the magic tool: scotch tape.

Before you teach this trick, you need basic commands first.  When I was teaching her this, I first asked her to lie down. 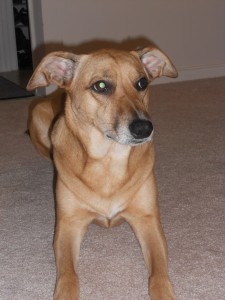 Then I asked her to put her head down. (Notice how she is so intently staring at something.  That’s the treats in my hand):

Sadie is staring at the treats in my hand. 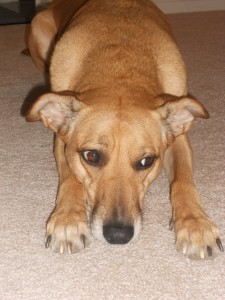 Then I added scotch tape.  I basically put a piece of scotch tape on her nose and she pawed it off.  I rewarded her for it. I need to insert a disclaimer here.  By the time Sadie and I were working on this trick, we had an incredibly trusting relationship.

I would not put scotch tape on a dog that I was not familiar with or hadn’t worked with in the past.  I knew Sadie would trust me and I knew this wouldn’t hurt her.  In fact, when the tape seemed a bit too sticky, I would make it less sticky by rubbing it on my shirt or carpet so that I made certain it didn’t hurt her.

Also, Sadie doesn’t usually take a very long time to learn tricks, so I knew I wouldn’t be using the scotch tape for a long time.  I am very in tune with Sadie’s non-verbal behavior, and she was always excited and comfortable.   If you choose to work on this trick with your dog, make sure that you anticipate beforehand how your dog will react.

Also, pay attention to your dog’s nonverbal cues—is he/she comfortable?  Nervous?  Are they still excited to be learning?  And as you’re working, always remember—positive experiences will help develop a positive and trusting relationship between the two of you! 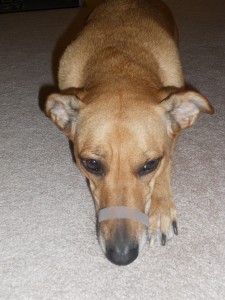 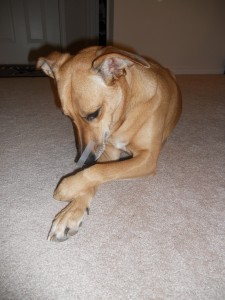 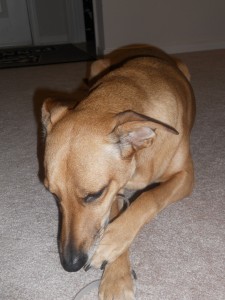 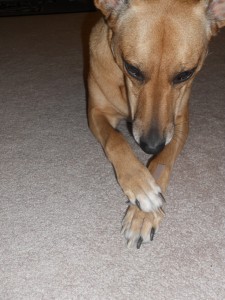 Then she threw me a ringer.  She would stop pawing once she got the tape off of her nose.  What I was trying to teach her was to rub her nose.  She was learning to take the tape off.

I could see in her eyes: “Mom!  I got it!  You taught me how to remove tape from my nose!”  I was saying “I’m trying to teach you to rub your nose by using tape!” So I used a piece of scotch tape again, she pawed it off and I rewarded her a little bit while she was pawing, but when she knocked the tape off, I didn’t reward her.

She got confused—“Wait… what?  I rubbed it off like you asked… umm… what should I do… umm… no tape… so I can’t take it off… hmm… maybe I’ll just try putting my paw on my nose again and see what happens?”

She pawed at her nose one more time with no tape and I went crazy with treats and praise! That was more than enough success during that training session, so I called it a day and let her go play.  The next day, we picked up again with the scotch tape a few times.  She knocked it off and stopped.  I didn’t reward.  She thought and thought… and then remembered she had to keep pawing at her nose even when the tape was off.  She did it, I rewarded.  Repeat and repeat.

Eventually I didn’t put the tape on at all.  She kept pawing.  She looked at me with her eyes that said “Ahh!  I got it!  You just want me to paw at my nose!” 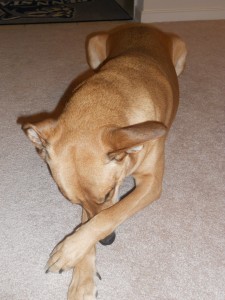 And that’s pretty much how training all of her tricks went.  I didn’t keep throwing out words hoping she would get it.  I didn’t force her into any crazy positions.  I slowly shaped her tricks and let her figure it out.

It was always a mental challenge (i.e. “Hmm… I pawed the tape off, but I’m not being rewarded… there must be more to this that I haven’t figured out yet…”)

In fact, sometimes she ends up creating her own tricks while trying to figure out what I am asking.  I wanted to teach her to hop straight in the air, but she ended up doing this strange jump and turn.  It was definitely cute, so I put it on cue and rewarded her for it.

But training is always a mentally stimulating activity for her and she is always rewarded—even if we leave a training session learning nothing.  She’s a good girl and our training has enriched our relationship in more ways than I could have ever imagined.

She just finished turning around and is now looking for a treat! 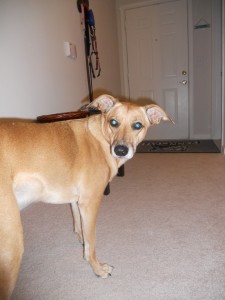 Sadie doing her finale bow. She says, "Come on Mom. Give me a treat! 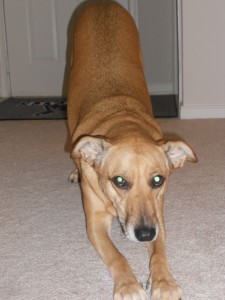