rscvm-ecws03
Blog > My Journey To Brisbane

My Journey to Brisbane, Part 1

“No dogs in the house!” my dad always said. I heard that so many times as a young girl, I cringe even today when I hear that statement. So, I vowed I would have as many dogs as I wanted, and they would all sleep in my bed, at least when I grew up!   Many years later my husband and I were ready for a dog of our own. A local rescue contacted us about a very young puppy and an hour later, I was holding the puppy of my dreams. He was an adorable, odd eyed, blue merle, ball of energy.

We named him Brisbane. The veterinarian thought he was probably only 6 weeks old. We spent the next 24 hours petting, playing with, and cooing over him. He claimed a small couch pillow as his own and barely covered half of it. Oh, the joy of a new puppy! It may be the warmest, fuzziest feeling ever.  The next morning brought the first symptoms of what turned out to be parvovirus. Brisbane’s age made his chance of recovery slim. 8 days and 2 blood transfusions later, they called to say he could come home.

He would need time to recover, but he had made it through! I held him all the way home against my chest, and he slept with his head against my heart. I was hooked on this precious pup. Our journey had begun.   Brisbane needed a lot of care, and the vet said “NO STRESS” so we jumped into action every time he whimpered, whined or barked. The effects, from no socialization due to the illness and being waited on hand and foot for months, soon caused serious issues.

He pulled terribly on a lead, barked at everything, jumped on people, counter surfed like a pro, and chewed furniture and clothes…anything he found, really.   Oh, did I mention he constantly chased and bit our ankles? It seemed he never slept, and my husband and I were exhausted and frustrated. Most nights I was on the floor with my head just inside the crate until Brisbane fell asleep and then I’d sneak off to my own bed. Getting up repeatedly to get him back to sleep in this manner probably wasn’t the way to go. Yes, you can laugh at me. Please enjoy a hearty one, all my friends have. 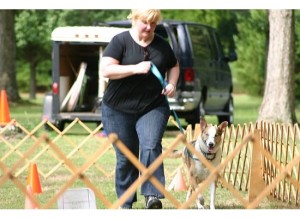 He was smart and quick to learn, so I enrolled in a class. We both learned a lot, although dominance and pack theory were popular. Brisbane didn’t respond well to being “dominated.” I should probably thank the dog gods he never bit my face. In my ignorance, I probably deserved a correction or two.

I wanted more. I wanted a relationship built on trust, where Brisbane and I worked together. Brisbane needed more to help him deal with everyday life. He was shy and fearful around strangers and in new places. I didn’t know how to help him. A couple of years went by like this and although I learned about lure and reward training, we never really made the progress I was hoping for, and his anxiety was getting worse.

I knew there was more work to be done, so I kept searching. Seeking for what, I didn’t know…yet.   I was checking out the Premier Pet Products’ website one day to purchase a new Gentle Leader and noticed they were hiring. This new job put me in touch with a world of training I didn’t know existed.

My supervisor started me down a new path. She introduced me to everything from learning theory to Rally. She recommended fantastic books like Don’t Shoot the Dog and Culture Clash. I had the opportunity to attend veterinary and training conferences, where I met the top veterinary behaviorists and trainers and soaked up every bit of knowledge I could.   I renewed my training efforts while learning about behavior, clicker training, and canine body language.

Classical conditioning and desensitization became powerful tools in my work with Brisbane. I was determined to be the trainer he needed me to become. Brisbane began to thrive with the reward-based training. Training and living with him became a joy, and I’m sure he thought, “I’m so glad she finally got a clue.” 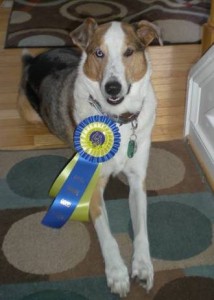 We started taking Rally classes and he was fantastic. We were a great team, at least during class. Our first trial proved we had a lot of work to do. While very adept at the skills, he and I both let nerves get the best of us. The more nervous and disconnected he became, the more I felt I had let him down. We both left stressed and frustrated. I was so caught up in my own emotions I was useless to him that day.

I felt lost, without a map…The journey doesn’t end here. Check back next week for the second installment! 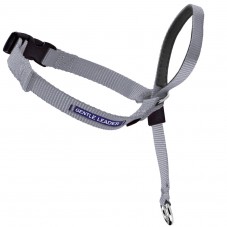