Puppies!  I’ve spent the last few weeks telling you about my experiences with my foster dog, Momma, and her 7 puppies.  The last 2 blogs have been about my experiences with Momma, and how I have been building a trusting relationship with her.  Check out the previous blogs: Welcome home, foster babies! and Momma, my BFF.  But now for the cute cuddly stuff—Puppies!!! Now that Momma was letting me touch and handle all of her puppies, I was so excited to start socializing them to the world.  When I got the puppies, they were about 7-10 days old.  By the time Momma was fully comfortable with me touching the puppies, they were just about 2 weeks old. 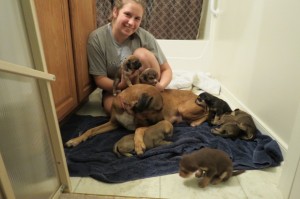 Because I’ve never raised puppies before, I scoured the research to remind myself about what I should be doing.  Puppies at that age explore the world mostly by scent, feeling, and temperature.  At around 2 weeks, their eyes began to open.  I spent short amounts of time handling the puppies, because I knew that short spurts of human interaction would help them be comfortable with humans in the future.  My handling was always gentle, as they were still little babies!

Snickers takes a look around and says "Who's this lady??" 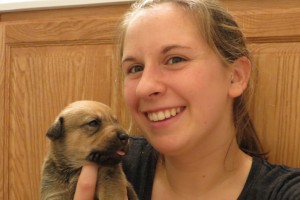 I also started to put the puppies on different textured floors (oh, the dreaded linoleum—I’m trying to set these puppies up for success!).  For the most part, the little ladies (and 1 gentleman!) just squirmed around and eventually made their way back to Momma.  But introducing these babies to different textures will help them out in the long run.

But for the most part, around this age, the puppies didn’t do very much except for eat and sleep (which sounds boring, but it’s still so cute to watch!).  At that age, puppies aren’t able to eliminate on their own, so Momma needed to lick them to encourage elimination.

It was so fascinating to watch how puppies and Momma intuitively knew what to do—despite not being able to see when their eyes were closed, they always could find their way to Momma to eat.  Momma instinctively knew when she needed to lick a puppy to encourage elimination.

Momma makes sure the puppies are always comfortable 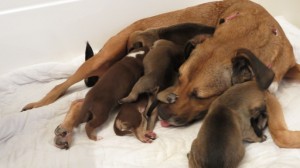 As their eyes slowly started to open, you could see them start to focus and explore the world a little more.  The puppies were starting to pull their feet underneath them and take a few staggering steps before falling over.  Their little murmurs to each other were getting a little louder, as if to say “Where the heck are we?!” 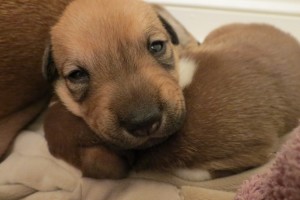 As a side note, I’ve mentioned previously that I have another dog named Sadie.  Although I believe wholeheartedly that Sadie would be nothing short of gentle, kind, and loving to the puppies, I have not let her interact with the puppies at all.  I recently got Momma used to me touching her puppies.

Allowing Sadie to be near her puppies will undoubtedly be another uncomfortable situation for her, and I believe that as the puppies grow more, the situation won’t be quiet as scary for Momma.

Since the puppies were really starting to grow, my husband and I sat in their area and named them.  We were tired of referring to them as “Ya know—the charcoal one.  No, I mean the one with the white belly” or “The Boy” (because there is only one!).  Our litter includes- Luna, Blondie, Tetra, Socks, Snicker, Zeus, and Reese. 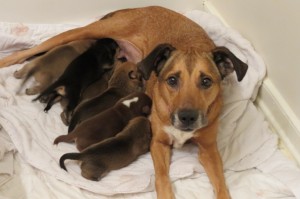 In the next week or two, the puppies will enter their serious socialization period.  At that point, it will be tremendously advantageous for me to introduce the puppies to as many things as possible to set them up for success.

The puppies will be introduced to other dogs, cats, kids, cars, veterinary practice (by people touching their ears, toes, etc), elevators, other floor textures, and much more!  It’s learning time-- so stay tuned!