You know us – we’re always up to something new!  In early Spring of this year, we completed an In-Home Usage Test (IHUT) for our new Passport® Pet Access Smart System. Our IHUT participants’ responses to this product were overwhelmingly exciting, and we couldn’t wait to share it with pet owners everywhere. Not only were our product development teams prepping this door for greatness, but lots of other folks were busy getting the public pumped up about the Passport as well.  PetSafe® may be based out of quaint Knoxville, TN, but we made it to the big city.

In September, the Passport Pet Access Smart System was featured in the New York Times’ Technology section.  One of our IHUT participants even got a subtle shout-out in the article. Two thumbs up to our product testers for being so paw-some and really putting this door to the test!  You can also find the Passport® door in some pretty popular magazines: 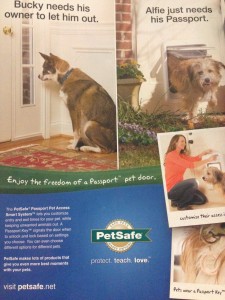 Passport advertisements -- featured in the September 2013 issue of HGTV Magazine

While the Passport IHUT was going on, it was “lights, camera, action!” for this door. Early this year, we made Doc, one of our co-workers here at the office, a star when we filmed the Passport commercial. I think his new nickname could totally be “Hollywood” because he was such a good boy at the shoot and in the commercial, too. 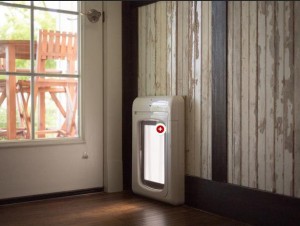 Something pretty cool happened recently in which we were able to feature the Passport Pet Access Smart System, and if you’re reading this blog, then you may have heard of it before – DIY Network’s Blog Cabin. Robin Rhea, PetSafe’s Senior Brand Manager, took a trip to Atlantic, NC last month to see the finished product of Blog Cabin’s 2013 coastal retreat and had a purr-ific time touring the home and catching a glimpse of some of our PetSafe products, including the Passport, featured in the home.

Let me tell ya’, whoever wins that place is going to be one lucky dog!  We have been hard at work perfecting the Passport Pet Access Smart System, and guess what? It’s. Ready. For. YOU.

To learn more about the Passport Pet Access Smart System or to purchase, visit our website at http://www.petsafe.net/. Relax, we’ll let the dog out for you!

We’re always looking for more passionate pet owners and their furry family members to test our new products. To learn about how you can become a PetSafe Idea Partner to test products or be involved in PetSafe Research and Development studies, please visit PetSafe Labs to get started. Product testers not only get to find out what our latest and greatest, but you may even get to keep the test product (for free!) and could receive $$ rewards or other PetSafe products for testing. We look forward to working with you!