PTSD and Pets: Finding Comfort in Our Furry Friends

Patriot Day began in the United States after the attacks on September 11, 2001. Our nation had a chance to honor the victims of terrorism, as well as the brave men and women who lost their lives trying to save others. This year I wanted to also honor the service pets who have given so much to war veterans who fought for our country while we recovered from the devastating events of that day.

I am the youngest of three. My two older brothers, Stephen and Nathan, have always been an inspiration to me. I always tried to compete with them, even if it meant hurling a neighborhood playmate down the snow mound so I could win a spot at the top with the two of them by my side. I was always scrawnier, slower and definitely less athletic, but I still tried to keep up. When both of my older siblings decided to join the Army, I knew this was one act I would not be able to follow. While I went on to college to become a jet-setting journalist (or so I had hoped), Stephen deployed to Afghanistan while Nathan was off to Iraq. After years of deployment and training they were both home safe and unharmed. Or so we thought.

Stephen after combat in Afghanistan.

Months after returning home, my brothers began experiencing extreme reactions to daily situations. Both were unable to function normally, and small incidents would send them into a tailspin. After extensive therapy and rehabilitation, they were considered disabled veterans suffering from Post-Traumatic Stress Disorder. Many may view a disability as a physical ailment preventing someone from performing regular tasks. PTSD is a difficult mental disability as it can be triggered by sounds, sights, situations or nightmares. While reactions may vary, I have seen grown men drop to the floor at the sound of fireworks on the 4th of July.

One way to help veterans cope is to find a great companion. Pets seem to have a way with humans. I don’t know what it is about them, but there’s nothing more comforting than warm puppy kisses or cuddling up next to a cute and furry kitten.  We depend on them to greet us at the door after a long day. To jump for joy and share in our excitement when we have a promotion at work. To be next to us on the couch licking the ice cream spoon after a bad breakup. 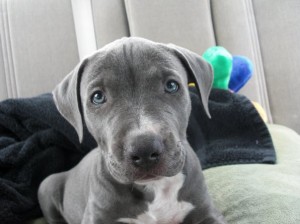 Nathan got his Pit Bull, Ruben, before he was discharged from the military. Ruben was immediately drawn to his new owner, and has helped Nathan when he feels an episode is near. Nathan will take him on a run or walk, and Ruben will be the first to alert the family if someone is nearing the front door or walking outside (a common PTSD trigger). 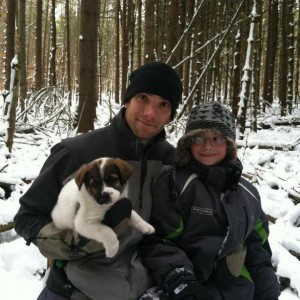 Stephen and his son pose with Cody on a winter hike.

Stephen adopted Cody after he was diagnosed with PTSD and discharged from the military. Cody was named after a fallen comrade, and has been by Stephen’s side through even the most difficult of nights. When nightmares occur, Cody is there to lick his owner and help reassure him that he is no longer in a war zone.   It was difficult to see such a drastic change in their behavior, but my brothers started acting like the people I used to know once they both had a dog. They started being able to go on long walks without constantly looking around to see if anyone was coming up to harm them. They started being able to sleep through the night. Best of all, they started to smile again. 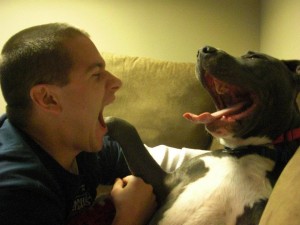 If you are someone who suffers from PTSD or something similar, there are organizations available to help match you to a furry companion. Active, disabled and retired military members are able to go through their local Veterans Administration chapter to find resources available to them for help.

Let us all take a moment to remember those lives lost on September 11, 2001, and to thank the service men, women and pets who have continued to protect our country after such horrible acts of terrorism.