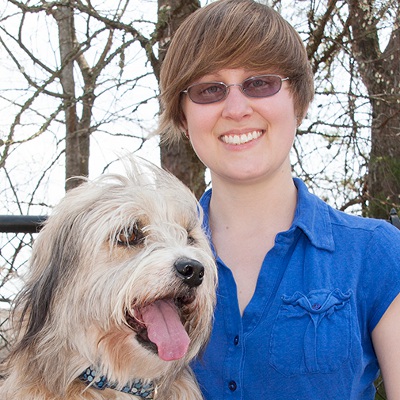 “Your dog is a jerk,” my husband said to me as we were cleaning up the mess Doc had left us. While we were at the grocery store, Doc had decided that the trash would be a great new toy. We came home to bits of paper towels, food containers, and other garbage strewn around the house. Doc’s excited “I did this for you” grin doesn’t seem to work on my husband; he was still pretty mad.

Trash raiding is easy to prevent and clean up, so it didn’t really bother me. My husband’s attitude was the real problem; by blaming our dog, he removed his own responsibility. “Next time we leave him at home, we’ll just have to put the trash where he can’t reach it.” I reminded him, “It’s not the dog’s fault; he doesn’t know any better.” Sometimes our pets’ bad habits aren’t really that bad. We need to adjust our own habits and remember that we love our pets despite their flaws (and remember that we have our foibles).

That’s why I wanted to share some of our pets’ bad habits and how we deal with them. 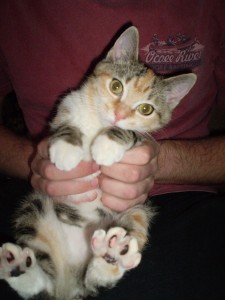 How can anyone stay mad at this face?

Lily likes to claw shoes, especially flip flops. She uses her scratching post all the time, but she just can’t resist those flips flops. We tried adding a scratching post downstairs, but she never uses it. Two things have helped discourage this shoe clawing:

Peeing on Clothes Ikki pees on things he shouldn’t. He’s gotten a lot better since we started cleaning the litterbox more often, cleaned up the old stains on the carpet, and moved the litterboxes around.

You can read more about stopping cats from peeing outside the litterbox in this blog post. But Ikki still sometimes pees on clothes that are left on the floor. So instead of throwing clothes on the floor for Ikki to pee on, we got three laundry baskets: one for colors, one for blacks, and one for whites. That way we aren’t tempted to throw the clothes in a pile on the floor to sort later. It makes laundry day much easier too!

Barking at Other Dogs 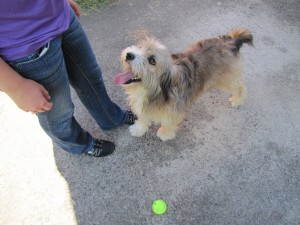 Doc is great at Fetch, but he’s not so great at keeping quiet around other dogs.

Doc’s a pretty well-behaved dog, but he does have a problem with other dogs. If he sees another dog, he has to go meet him right away. If he can’t sniff him immediately, he starts to whine loudly.

If we pass the dog without interacting, he starts to bark in frustration. Doc has gotten a lot better because he interacts with other dogs every day at work, but it’s something we’re always working on.

By making it a command, he associates the other dog with a treat, and it’s helped him be less anxious around other dogs. Now he’s great with dogs he knows well, and he’ll look up at me for his treat when he meets a new dog.

His behavior around other dogs has improved, but he’s still not 100% comfortable with other dogs. He wears a bark collar as a backup at work, for situations where he sees a dog he really hates or another dog starts barking at him.

With the collar, if he starts to bark, it usually takes only a bark or two before he stops. He’s been barking less at other dogs even when he doesn’t wear the collar. I’ve also started teaching him Speak and Quiet with a clicker so I can stop him before he barks.

When you’re working on long-term behavior problems, it helps to come up with a good strategy with the help of a dog trainer. And make sure you stick to it! The easiest way for me to work with Doc is while we’re at the office, and I never know when another dog will appear, so I keep my pockets full of treats.

How do you deal with your pet's bad habits?

At PetSafe® brand’s Knoxville headquarters, Roslyn McKenna is a Web Content Specialist. Roslyn comes from a family of animal lovers and currently shares her home with 4 cats and 1 dog.

< Previous Post
How to Design a Dog Park
Summertime, and the Living Is Easy, Unless You Suffer a Dog Bite
Next Post > 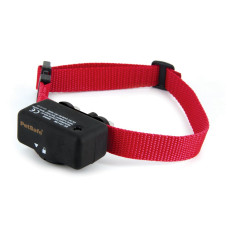