Tails from a PetSafe Idea Partner 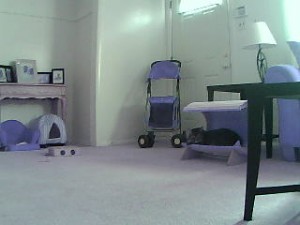 Rocco is caught by his SocialPet camera taking a snooze.

I always thought my cat Rocco slept all day when my husband and I were away at work.  Well, boy was I wrong.  With the PetSafe® SocialPet™ system I was able to keep an eye on Rocco, as well as keep an eye on my house.

Rocco seen on the SocialPet camera!

On the first day I set up the camera, while I was at work, I saw Rocco actually playing with toys I never thought he even played with! It took a few days for Rocco to get used to the camera, but it was adorable watching him adjust.

One of the features of the camera is panning the camera in all directions, and when that happens, even though it is very quiet, Rocco still heard it.  Rocco would run up to the camera and stare at it intensely until he felt comfortable and resumed playing.  After all that playing, I would hit the button to treat him, and the treat dispenser would make a beeping noise, which became an alarm for a snack.  This became one of Rocco’s favorite features because that equaled snack time!

One of my favorite features would have to be having the ability to take pictures of Rocco while playing or just hanging out.  Not only could I take pictures, but my family and friends could, too. 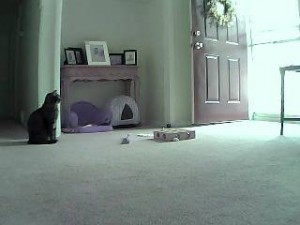 Rocco enjoying some sun with the door open!

It was not all fun and games though.  I repeatedly caught Rocco chewing on our surround sound system wires.  After catching him a few times, we decided to “Pet Proof” the wires, so he would not get harmed or harm our system.

Overall, Rocco and I could not be more pleased with the SocialPet system.  I am more at ease as a pet parent when leaving my little guy home alone for 9 hours a day, and being able to treat him throughout his day is a beautiful thing!

**This product testimonial was provided by Amanda H who received the SocialPet system at no charge in exchange for her testing results.** If you would like more information on how you can potentially test and sometimes keep upcoming products, sign-up for PetSafe Labs today!