Why do Cats Love Laser Toys?

The little red light races across the floor, up the side of the couch, and across the cushions, pausing for a moment, then taking off in a different direction. And racing right behind it is your cat, intent on catching this "prey" that moves so rapidly and erratically, with so much more apparent energy than the catnip mice that sit ignored under the couch. 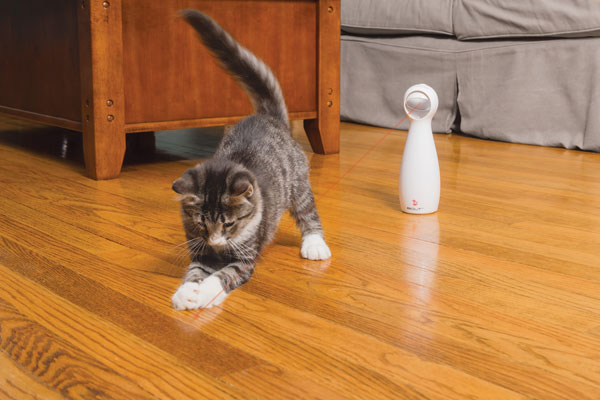 Just why does your cat love to chase the light from a laser toy around your house? Attribute the appeal to a laser light toy's ability to mimic the movement of small prey animals. When you make the light dance quickly, then slowly, then suddenly change the direction of the light from forward to backward, you simulate how a small animal would dash about when being chased by a cat. Those movements tap into your cat's natural instincts. After all, if he lived in the wild, your cat would spend time each day chasing small prey animals--so he needs to be able to react quickly to those rapid movements and changes in direction. Because of his hunting instincts, it's no surprise that he becomes immediately intrigued by a toy that acts like his prey would in the wild.

Because they do such a good job engaging a cat's attention, a laser light toy makes a great choice for interactive play between you and your pet. You most likely already know how important regular playtime is for your cat, and time spent playing together only helps your cat's health and the bond you share. Regular exercise--including through play with a laser toy--helps keep your cat in great shape, which can be even more important for indoor cats.

Before you bring out the laser light toy for playtime, however, keep a few things in mind. Your cat can't actually catch the light, and this may lead to frustration for your cat over time. Some animal behaviorists suggest including soft toys, such as stuffed mice, in play sessions with the laser toy. Near the end of your playtime, let the light come to rest on the mouse, so your cat can "catch" the prey he has been chasing. Once your cat has the prey in his grip (whether by biting or by scratching), you can turn off the light until the next play session.

And while a laser light toy designed specifically for cats is perfectly safe to use, some behaviorists and veterinarians caution against shining the light directly into your cat's (or anyone else's) eyes. While damage to her eyes is highly unlikely, a light shone directly in the eyes can cause discomfort. To ensure your cat's safety, look for a laser toy made specifically for cats.

Lastly, be careful where you direct the light from the laser toy when you are shining it around your house. Your cat may become so caught up with chasing the light that he won't realize he's about to run into the wall--until it's too late.